The large blues are an interesting genus of African butterflies that have been found in the Thorntree Conservancy. The genus is Lepidochrysops Hedicke, 1923. This is a large, solely Afrotropical, genus containing about 130 species. Most species have males with various shades of blue on the uppersides, but some species are brown. Most females are brown with various sized blue bases to the uppersides of the wings. The larvae of the few species that have been bred are phyto-predacious. This means the first two larval instars feed on the developing seed ovules of their foodplant and thereafter the later larval instars live in ant nests as ant-nest parasites feeding on the larvae and pupae of species of formicine ants generally belonging to the genus Camponotus.

The rarest of the Lepidochrysops, and categorised as extinct in the South African Red Data Book- Butterflies (S.F. & G.A. Henning 1989), is Lepidochrysops hypopolia (Trimen and Bowker, 1887). The common name is Morant’s blue. It is only known from 2 males taken by Walter Morant on 21 September, 1870 at Blue Bank, near Ladysmith (KwaZulu-Natal), and a single male caught by Thomas Ayres near Potchefstroom (North West Province) in 1879. The Morant specimens are in the Natural History Museum, London and the Ayres specimen is in the South African Museum, Cape Town. 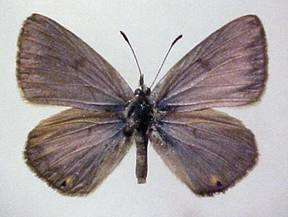 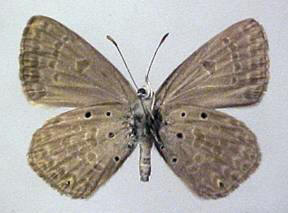 In the late nineteen fifties David Swanepoel set out to rediscover Morant’s Blue and searched for it in KwaZulu-Natal and around Potchefstroom. He eventually discovered a large blue at the New Doornfontein Mine near Carletonville. He sent specimens to the British Museum in London and they said that it did not look exactly like the Ayres or Morant specimens. He therefore decided to describe it as a new species. Lepidochrysops praeterita Swanepoel, 1962. The common name is the Highveld blue. Another colony was subsequently found at Potchefstroom and there are odd records for Sasolburg and Krugersdorp but no definite colonies are known from these areas. It is quite probable that this species is the same as L. hypopolia as they are so closely related and both occur at Potchefstroom. The main difference is the lighter grey underside of L. hypopolia and there is a gap of eighty years between them but this is unlikely to have resulted in this difference naturally. In the authors opinion the pale underside of L. hypopolia was possibly caused by the killing agent having a chemical effect and bleaching these specimens. These specimens were apparently killed by chemical means as evidenced by their intact thoraxes.

L. praeterita is included in the current Red Data List and despite numerous unsuccessful visits to the colonies at Carletonville and Potchefstroom over the past few years it would appear that the species is under severe threat. The species only seems to fly when the habitat has been burnt and the lack of burning is a major threat. 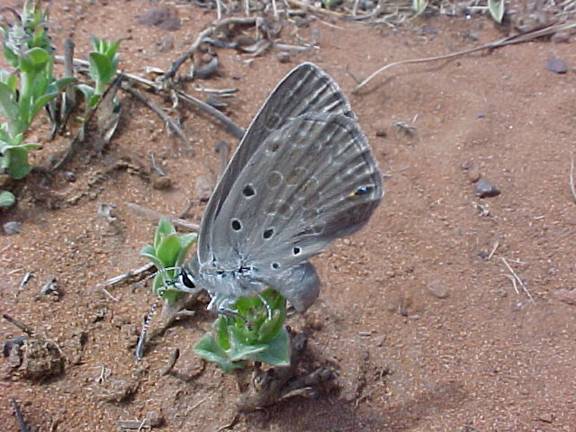 Female L. praeterita laying an egg on the underside of a leaf of B. grandiflorum

An old record existed for L. praeterita from Walker’s Fruit Farms but only this year did Peter Roos visit the area and find the colony. This is on the burnt southern facing slope above the Arboretum Nursery. Its flight is fast, erratic and close to the ground. It flies in late September into October and is often only on the wing for a couple of weeks. The larvae feed on Becium grandiflorum (Lam.) Pichi-Serm. (Lamiaceae) [Edge, in Pringle, Henning & Ball, 1994: 249] The associated ant appears to be a small Camponotus but nothing has been published.

It is interesting to note that this season the Becium was not in the correct stage of development for L. praeterita and the females were recorded laying their eggs on leaves for the first time by Graham Henning.

Another rare large blue found in the Thorntree Conservancy is Lepidochrysops procera (Trimen, 1893) its type locality is Estcourt, Natal and it flies in a few localities between there and Potchefstroom .The common name is the Potchefstroom blue. It inhabits Grassland and savanna. Its flight is medium-fast and close to the ground. Specimens often feed from the flowers of the larval food-plant. The flight period is October and November. In most localities the foodplant (Becium grandiflorum) flowers in October and November; this corresponds to the flight period of the adult.

The other large blue is the Twin-spot blue, Lepidochrysops plebeia (Butler, 1898) with the type locality in Zimbabwe. In this species the male has a brown upperside. The larval food plants of this species are Lantana rugosa Thunb. (Verbenaceae) and the associated ant is a Camponotus species [Williams, 1990: 11]

In both these species the males are avid hilltoppers, selecting low bushes or rocks as perches.  Males also establish territories on flat ground.  Females fly at random and are often encountered in the shade of large thorn trees, where the larval food-plants preferentially grows. Both species fly throughout the summer months. 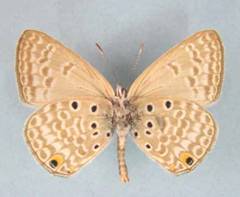 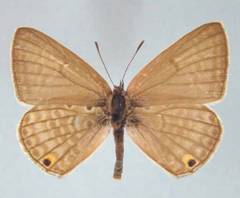